My dear friends who manage this blog have always encouraged me to explore the world through travel. So it seemed only fitting that after spending a week trekking through Spain, that I share my husband’s and my adventure on their travel blog. I’m looking forward to digging up this post when the four of us venture to Barcelona together. 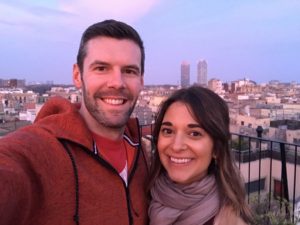 If you are thinking why Spain, here’s why in a nutshell: the airfare was cheap, it’s easy to get around using public transportation and I love all things tapas and Spanish wine. But also because Gabe is an architect (shameless plug). Hence our day devoted to Gaudi, “the” Spanish architect to know.

Departing from Newark airport, we spent some number of hours in the air — I’m really bad at calculating time travel — and boom, we landed in Barcelona (locally pronounced Barthelona). In desperate need of caffeine among many other things, we hit a little airport cafe. On the menu: fresh pressed OJ, a variety of meats and cheeses and freshly baked pastries. What the fuck, we haven’t even left the airport yet and I love the food already.

Because of the active cab strike, we got a crash course on the metro system courtesy of airport information; of which included a pair of lost then found subway tickets, two subway transfers, and viola, 45 minutes later we arrived at our metro stop in the Gothic quarter. We strategically picked this part of the city because it is centrally located to all things historic and delicious. 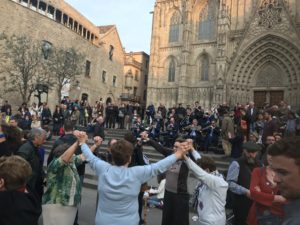 After climbing a six-story walk-up (with bags in tow), we met our Airbnb host, Antoine. With a few formalities out of the way, Antoine bid us adieu, and we popped open the bottle of cava he left for us and headed up to the roof to enjoy the sunset — thank you, Antoine!

Rooftop view from our Airbnb

Between the jet lag and far too many 2 euro wines the night before (shit, did we kill that bottle of champagne?), we nearly missed our scheduled tour at La Sagrada Familia — which if you remember from above, was a big highlight of this trip. Cafe con leche (coffee with milk) in hand, we sprinted the 30 minute walk to the cathedral. 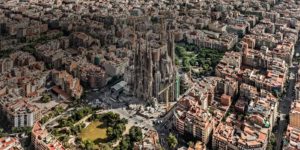 I’ll be honest with you, when I Googled Sagrada Familia, I thought it was hideous. But having now seen it in person, it is by far one of the most intriguing and beautifully-crafted architectural buildings. As a non-architect, here are three reasons why I think it’s well worth the visit: 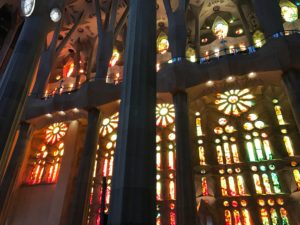 Regardless how you feel about design or religion, you can’t help but get lost in the nooks and crannies of this building. We pre-scheduled an audio and tower tour which is definitely the way to go; especially if you are like me and know nothing about this kind of stuff. #ThankGaudiItsFriday 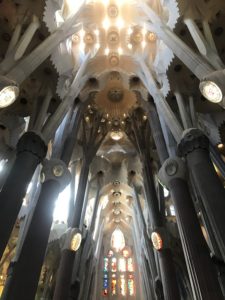 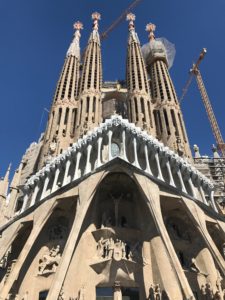 Nonetheless, this park is a peaceful sanctuary perched high up on a mountain. There’s tons of paved paths as well as some trails. People were either having an active workout or enjoying one of multiple musicians and artists that regularly perform in the park; like this guy — 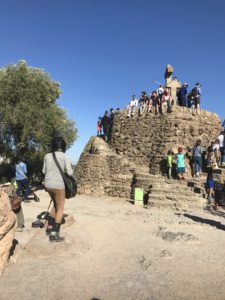 Flash forward an hour later, and it was 3 PM local time and we were approaching hangry. Thankfully, we stumbled on this little tapas bar called Bertso Taberna. 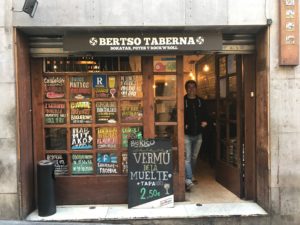 Inker (the chef) and his bartender buddy spoke very little English, but quickly made us feel like regulars. We chatted over Amstels, snacked on some pinchos (see definition below) and they whipped up the house special for us: a catfish omelette — trust me, it was money!

Fun fact: pinchos are small sandwiches you take from the bar. They come in a variety of options like ham and cheese, croquette and seafood salads. You’re charged by the number of toothpicks on your plate. I fucking love you Barcelona! 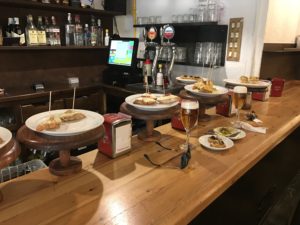 A display of pinchos from Bertso’s!

If you’ve made it this far in, you’re in luck — the day is almost over. As was my energy level. I convinced Gabe to head over to the Las Ramblas, an outdoor walkway lined with shops through the main part of town, selfishly hoping to get in some shopping. But truthfully, I left little room in my luggage and was in desperate need of a shower.

Walking down the Ramblas we saw all of the ultra high-end designer stores, and in the reflection of one of the windows spotted Casa Batllo. You guessed it, another Gaudi creation. It’s a home turned museum, and the best way that I can describe it is a house designed on acid while watching Spongebob. The complete lack of any right angles in the building (stop to think about that) makes it feel like you’re in an aquarium. Seriously what was this guy smoking?
The audio tour is a bit pricy but pretty cool. You’re given an iPhone equipped with an audio guide and VR technology that when held up to the room displays random sea creatures and other objects that served as inspiration to Gaudi’s design. 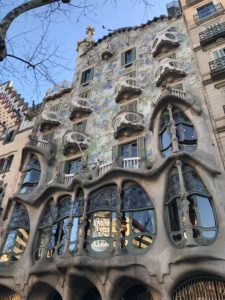 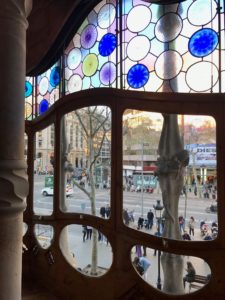 With day one drawing to an end, we headed back home. Between 106 and 114 steps up the six story walk-up, we showered, rested and made our way back out for tapas. I know tapas is all about the small bites, but us “turistes” were hungry like Americans.