In case you missed it, I’ve taken over this blog (temporarily) to share my adventures from a recent trip to Spain. My hubby and I started in Barcelona, and after three relatively tame days, it was time to kick things up with the Las Fallas de Valencia, or what I coined, the let’s light the city on fire festival. 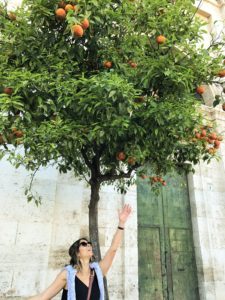 You won’t find any Valencia oranges in the post (well, other than this photo)

It just so happened that this four-day festival was taking place during our vacation. After reading up on it, I had to go. Basically, it always takes place on the 15th – 19th of March and is centered around these floats (fallas). The general idea is everyone spends each day partying until the very last day, known as Le Crema. That is when the city  chooses the winning fallas and the remaining floats are lit on fire. 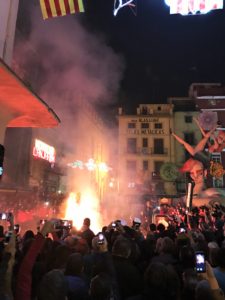 We left Barcelona early Sunday morning and three hours later (via high-speed train), we were in Valencia. It was about noon when we started to walk to our Airbnb. With each block that passed, the aroma of gunpowder intensified. What the fuck did I just sign up for?!? As we hit the main drag, the street opened to a sea of people, performers and random eruptions of fireworks. 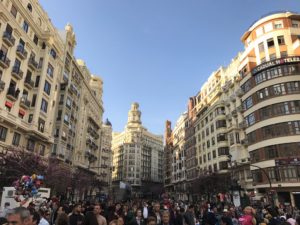 We hooked up with our host who showed us around the baller apartment. The best part of it was arguably the terrace which directly overlooked a large fallas. After about ten minutes of instructions in broken English, we gathered a few critical details: 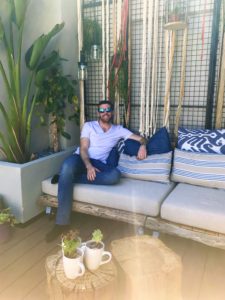 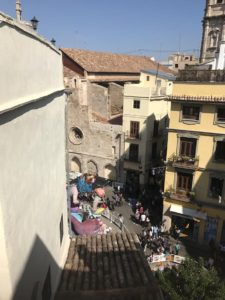 The view from our terrace overlooking the fallas

We said adios to our host, grabbed a six-pack of Amstels, and headed out to see the fallas before they turned to ash. The vibe in the city felt like the calm before the tsunami. The locals are burnt out from the three days of partying and most are saving their energy for the main event – La Crema, after the city names the winning fallas. The losing floats are stuffed with fireworks and from 10PM to 1AM randomly ignited to meet a fiery death. 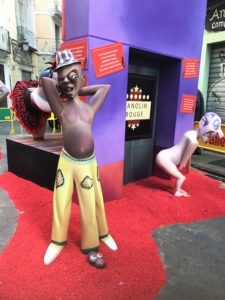 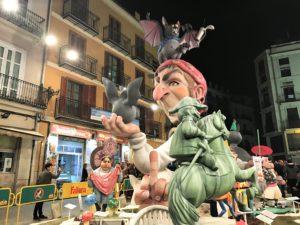 They didn’t win, but these fallas get my vote for most bad-ass

The sun was starting to set (as were the effects of our six-pack). It was a little after eight when we met some Americans while buying our second 6-pack. That’s when we noticed the silence which was immediately followed by pandemonium. Apparently that meant the first fallas was getting lit up somewhere.

Now, there isn’t an exact order, but we found out that they burn the small fallas first and work their way up to the mac daddy of fallas – a massive phallic looking structure that shoots out fireworks. Since you don’t know exactly which fallas will be burnt down next, you kind of have to be in the right place at the right time, or be prepared to chase the after the sounds of hundreds of fireworks among thousands of people. And that pretty accurately describes how the next few hours of our night went.

Shit! It was almost 11. Time to get up to the terrace. We watched as the crowd started to gather. Once we saw the firefighters in position, we knew it was time for this float to meet its fate. 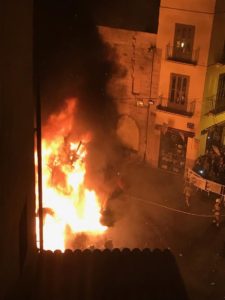 First, they lit a string of fireworks that was connected to the fallas. There was a slight pause followed by a series of massive pops then a few loud booms. The fire quickly started to build and you could feel the heat even from our four-story balcony. As I’m panning around in my Instagram video, I realized that ash and embers were flying all around us. They weren’t kidding about moving those cushions inside!

It was midnight and after a quick bite of shawarma, we made our way to the city’s center square. Everyone was pushing their way to the front of the crowd, but based on our last experience, we were content with our safe vantage point. Once that lone firefighter was in position (dude, you drew the short straw didn’t you?), you knew it was go time. And because there really aren’t any words to describe it, here’s a timelapse video that should give you the full scope of the grand finale. 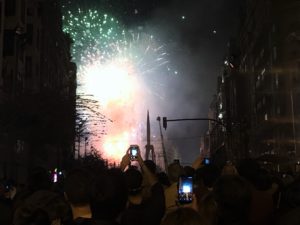 Las Fallas is unlike anything I’ve ever experienced. I’m SOOO happy we decided to go all in. My only regret is not buying these dope bandanas before I inhaled the various toxic fumes. Oh well, there’s always next year. 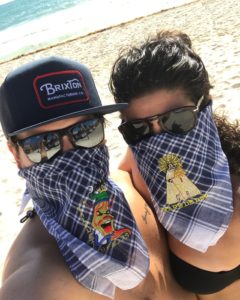 Shout out to our neighbors who kept our cat alive while we were away.